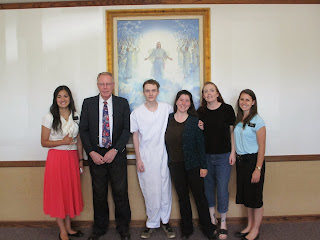 Anyway, this week was good. We went on two exchanges and I got to go with a Spanish sister to her area. Let's just get this straight...SPANISH AND PORTUGUESE ARE NOT THE SAME LANGUAGE! Hahaha I tried my best to talk to people though. It was super duper fun! And bless the heart of that sweet little greenie. She straightened me out and inspired me to be more diligent in my language studies. I lost a lot of my motivation for studying the language, but she helped me make goals and I'm back on top of things.

Then I got to exchange with another sister that used to be in my zone in Loomis. She struggles with depression really bad, but we've been friends since day one, so she talks to me a lot about stuff. I love her so much! We had a fun exchange...we may or may not have accidentally stayed up till midnight talking...it was like having a sleepover haha. :)

M IS GETTING BAPTIZED ON SATURDAY!!! :) it has been a struggle to get her to this point. We have had to be extra diligent and persistent. She texted/called us everyday telling us not to come over for one reason or another...but we still went and had to fight off whatever the excuse was. And in her prayer she cried as she thanked The Lord for sending Sis Giani and me here to Tempo Park Ward. She said she's been waiting her whole life for this moment to know the truth and know God. She's the sweetest and I love her dearly.

Prayer works. Giani and I were having some contention this week, which is totally normal, it happens to all companionships, especially around that time of the month...anyway, I had a terrible attitude toward her and I prayed that Heavenly Father would help me to have a better attitude, but I felt like at that point in time it was impossible. Then a thought came into my head clear as day. "You think I can't do that? I created the world. I designed your circulatory system and you think I can't help you have an attitude adjustment?!" It humbled me and my attitude adjusted.

I love y'all more than a lot. Have a good week.