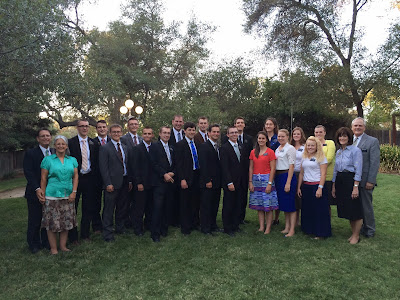 This week I just want to tell y'all about someone that I absolutely love. Her name is TH. TH has a boyfriend, G, who served his mission in South Carolina. He was a bomb missionary and did some great things, but after he came home he started making some poor decisions and soon became inactive in the Church. He and TH fell in love and long story short moved out to California where two Elders came knocking on their door to meet her boyfriend. Well G introduced her to he Elders and she quickly fell in love with the gospel. She read the Book of Mormon and got an answer that it was true. She loved when the Elders would come by and the Spirit they brought with them. And she eventually decided to get baptized....only problem was she and G were living together and he wasn't ready to get married. So they stopped coming to Church and meeting with the Elders and returned to the life they had been living.

Fast forward about 6 months. Two sister missionaries are given TH's address. They stop by 15+ times at different times of the day, Facebook her, call her....nothing. But for whatever reason they felt strongly that they should keep stopping by. One Sunday night the Sisters were in the bad part of town where TH lives, which was unusual for these two. It was already 8:30pm and they still had to bike all the way home, but they decided to just go knock on TH's door. Might as well since we're here. They knocked and waited....knocked and waited....then finally the door opened and it was TH. She welcomed them in with her thick southern accent and poured out her heart to them. She felt horrible. For the past six months she's been fighting an inner battle between what she knows is right and the man she loves. She told us at she felt like she was choosing G over God and she knew it wasn't right. She wants to just go to a court sign a certificate to be married and then go get baptized. She's ready for it and she wants it more than anyone I've ever met. We cried with her and encouraged her to tell G what she told us. That night they talked about it and G knew that they needed to change and told her they would. We set a goal for them to get married Nov 1st! And I'm going to miss it! And the baptism! :(

But y'all. I seriously love her sooo much! Like I want to be her best friend. She is so sweet and when we left she said the prayer and I've never heard such a powerful sincere prayer in my life. I'm so sad I'm not going to get to watch her and G progress. :(

This week was no fun. I had to say goodbye to everyone. It still hasn't hit me that I'm actually leaving tomorrow. I love this ward so much and am going to miss everyone SO MUCH! I LOVE them!!! I finally got my bags all packed (which was a miracle in and of itself. We went on exchanges this week and the sister that came here with me is a bomb packer, so she basically packed my bags for me)

Love y'all. I'm probably not going to email anyone anything else. This is like he craziest Pday of my life.